This Shepherd's Notebook blog is moving to the Maryland Small Ruminant Page at https://www.sheepandgoat.com/blog. All new posts will be posted to the new blog site effective immediately.

Shepherd's Notebook was created in 2006 to provide timely information to sheep and goat producers and anyone else interested in small ruminants. Since 2006, over 1100 posts have been made.

The old blog site will remain online at https://mdsheepgoat.blogspot.com. Old blog posts will be continue to be catalogued by the search engines. You'll still be able to search old entries via keyword or labels.

Go to the new Shepherd's Notebook blog at https://www.sheepandgoat.com/blog.
Posted by UME Small Ruminant at 4:43 PM No comments: 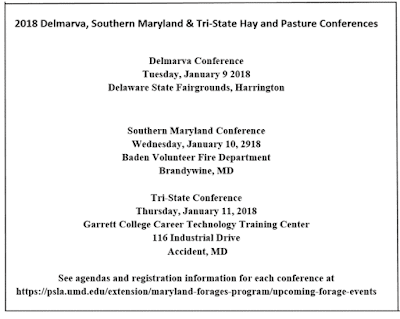 https://psla.umd.edu/extension/maryland-forages-program/upcoming-forage-events
Posted by UME Small Ruminant at 9:25 AM No comments:

Effect of anti-coccidial drugs in goats

Researchers at Texas A&M University compared the efficacy of two anti-coccidia drugs in goats. One hundred and fifty young goats, housed on concrete lots, were randomized to receive either amprolium (50 mg/kg once a day for 5 days by mouth) or ponazuril (10 mg/kg by mouth once) if they had fecal oocyst counts >5,000 per gram.

Both treatments resulted in decreased oocyst counts post-treatment compared to before treatment. There was no significant difference between fecal coccidia oocyst counts between goats in each group. There was no significant difference in body weight between goats in each group. This study showed that both amprolium and ponazuril were effective in decreasing fecal coccidia oocyst counts in this group of goats. 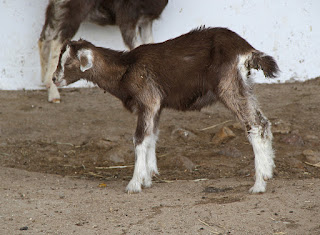 Coccidiosis is an important disease of young goats (and lambs) leading to weight loss, diarrhea, and death. In the USA, both ionophores and decoquinate are labeled for prevention of coccidia in goats (and sheep). However, there are no drugs approved for treatment of clinical cases of coccidiosis in either species.

Impact of Selection and Breed on Resistance

For years producers have been told they need to utilize selective treatment and cull animals that require greater numbers of treatments.  Using the eye color score system (FAMACHA) we are able to select for resilience, but there is little evidence of the impact.

Kentucky State University started with a grade Boer herd in 2005 and added Spanish (2010) and Savanna (2011) breeds to evaluate breed differences under Kentucky’s environment.  The herds were selected for production and parasite resilience/resistance by culling any doe that did not bring a kid to weaning and number of dewormings a doe received during a 12 month period.

We moved the number of dewormings down over the years from 5 dewormings in 2008, to our current standard of culling any doe that is dewormed 3 times, or more, in a year. We started evaluating parasite loads in the kids at weaning and 60 days post weaning in 2016.

Posted by UME Small Ruminant at 12:21 PM No comments: 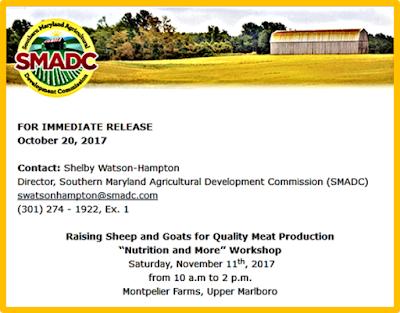 https://smadc.wufoo.com/forms/zhb7flk049s4ri/
Posted by UME Small Ruminant at 12:09 PM No comments:

As part of efforts to eradicate scrapie, US sheep and goat producers are required to follow federal and state regulations for officially identifying their sheep and goats. Prior to October 1, 2017, the National Scrapie Eradication Program provided free plastic ear tags and applicators. As of October 1, the program will only provide free metal tags. 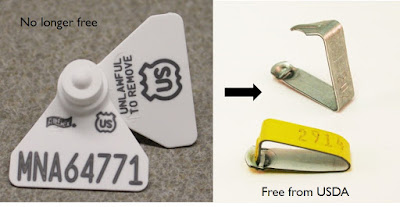 Scrapie is a fatal, degenerative disease affecting the central nervous system of sheep and goats. There is no cure or treatment for scrapie. While the incidence of scrapie has been significantly reduced, the goal remains: to have the US eventually declared scrapie-free by international animal health organizations.

Read latest fact sheet regarding scrapie identification and record keeping
Posted by UME Small Ruminant at 11:33 AM No comments:

The Fall 2017 issue of Wild & Woolly has been published. Wild & Woolly is a quarterly newsletter for sheep and goat producers. It is published by University of Maryland Extension. 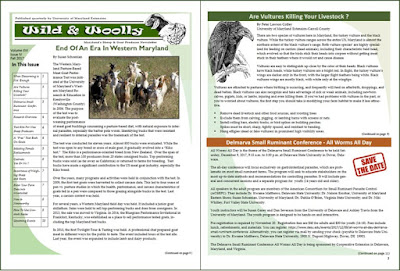 Subscribe to the newsletter listserv to receive an email when a new issue of the newsletter has been published. Send an email to listserv@listserv.umd.edu. In the body of the message, write unsubscribe sheepandgoatnews.

PDF file
via ISSUU
Newsletter Archive
Posted by UME Small Ruminant at 11:26 AM No comments:

All Worms All Day

All Worms All Day is the theme of the 2017 Delmarva Small Ruminant Conference to be held Saturday, December 9, 9:15 a.m. to 3:30 p.m., at Delaware State University in Dover, Delaware. 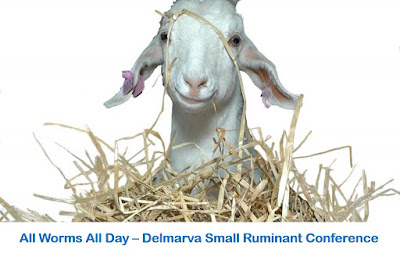 The program will feature general and concurrent sessions. There will be a parallel, separate program for older youth, age 14 and up. All of the speakers for the adult program are members of the American Consortium for Small Ruminant Parasite Control (ACSRPC). The instructors for the youth program will be Susan Garey and Dan Severson from the University of Delaware and Ashley Travis from the Universit of Maryland.

The registration fee is $40 for adults and $30 for youth. The fee covers lunch, morning refreshments, and proceedings (flash drive). To request special assistance due to disability, please contact Dr. Kwame Matthews by November 20 at kmatthews@desu.edu or (302) 857-6540, by November 20.

On September 22, 2017, thirty-nine rams from the Southwest AREC Ram Test in Virginia were auctioned off to eager bidders. One hundred and ten rams originating from twenty-six flocks in nine states were delivered to the test site on May 30. Thirty-nine top-performers were selected for the auction. They represented the top 60 percent in performance.

Following a three week adjustment period, the rams were evaluated for growth and parasite resistance over a 70-day period. They grazed fescue paddocks and received supplemental feed (76% TDN, 18% CP) at a rate of approximately 3 percent of their body weight. At the start of the test, the rams received an oral dose of 5000 3rd stage Haemonchus contortus. Body weights and FAMACHA© scores were determined biweekly. Fecal samples were collected every 14 days. The rams were scanned at the end of the test to determine backfat and eye muscle depth. An index, based on a combination of traits, was used to identify top performers and determine the sale order.

The Southwest AREC Ram Test is conducted annually at Virginia Tech's Southwest Ag Research & Extension Center in Glade Spring, Virginia. The first test was conducted in 2012. For more information about the test, contact Lee Wright at (276) 944-2200 or Dr. Scott Greiner at (540) 231-9159.

The next ASI Let's Grow Webinar is Tuesday, October 3, 2017, at 8 p.m. The title of the webinar is Selection of Replacement Ewes and Culling Underperforming Ewes. The presenter is Susan Schoenian, University of Maryland Sheep & Goat Specialist.

Sound, productive ewes are the foundation of a successful sheep farm. Selection and culling decisions will go a long way towards ensuring profitability. 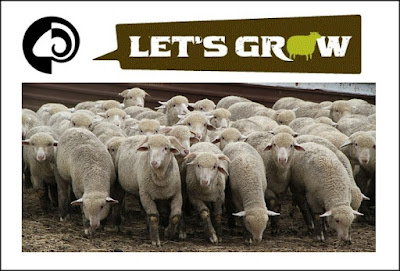 This webinar is made possible with funding support from the Let’s Grow Committee of the American Sheep Industry Association.

http://www.optimalag.net/sheepagriculture/webinars/replacement-ewe-selection-and-culling-of-underperforming-ewes/
Posted by UME Small Ruminant at 9:21 AM No comments:

The American Goat Federation is hosting a webinar series in September 2017. The first webinar will be Tuesday, September 5, 7-8 p.m. EST. It will give a brief history and overview of the current state of the goat industry. The speaker is Dr. Reid Redden, Extension Sheep & Goat Specialist for Texas A&M AgriLife Extension Service. 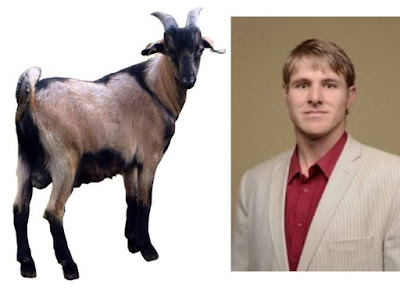 The American Goat Federation (AGF) was organized in 2010 to represent the interests of all organizations and producers engaged in the sustainable production and marketing of goat milk, meat, fiber, pack and grazing services across the United States. The goal of AGF is to unify, improve, and advance the American goat industry by providing input to agencies on public policy and research, and providing information and education to producers to achieve maximum success.

Posted by Susan Schoenian at 10:08 AM No comments: 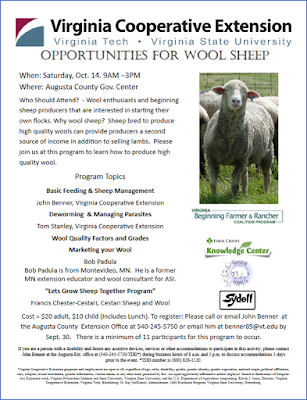 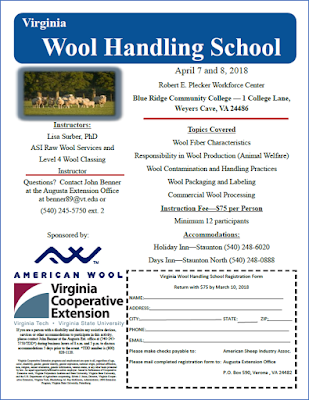 Posted by Susan Schoenian at 10:03 AM No comments:

The 42nd  Annual Virginia Performance Tested Ram Sale, Ewe Lamb Sale, and Sheep Field Day will be held Saturday, August 26 at the Shenandoah Valley Agricultural Research & Education Center near Raphine, Virginia. The educational program starts at 10:30 am, with the ram and ewe lamb sale starting at 1 pm. Information is available on the Virginia Sheep Producers Association web site at www.vasheepproducers.com.

The Virginia Tech Sheep Center will be hosting its 18th annual Production Sale on Saturday, September 2 at the Alphin-Stuart Livestock Arena on the campus of Virginia Tech. Approximately 50 head of Suffolk and Dorset ram lambs and ewe lambs will be offered. Additional information is available at http://www.apsc.vt.edu/extension/sheep/.

On Friday, September 22, a Sheep Field Day and Katahdin Ram Sale will be held at the Southwest Agricultural Research & Education Center in Glade Spring, Virginia. This is the fifth year for this hair sheep ram performance test which includes evaluation of parasite resistance. The educational program will center around this activity, and the top end of the rams will be sold. The Field Day will begin at noon with sale to follow. Details and information will be forthcoming on the Southwest AREC web site at https://www.arec.vaes.vt.edu/arec/southwest-virginia.html.
Posted by Susan Schoenian at 10:56 AM No comments:

A New Era in Western Maryland

The test was conducted for eleven years. Almost 800 bucks were evaluated. While the test was open to any breed or cross of goat, it gradually evolved into a “Kiko test.”  Over the span of the test, more than 100 producers from 20 states consigned bucks. Top-performing bucks were sold (as far away as California) or returned to farms for breeding.

Over the years, many programs and activities were held in conjunction with the test, including field days, tours, sales, skillathons, and carcass evaluation. In 2014, the BluegrassPerformance Invitational in Frankfort, Kentucky, was established as a place to sell performance tested goats, including the top-performing bucks from the Maryland test. This year's sale is September 1-2, 2017.

Now, the goat test era is over (in  Maryland). Goat producers will be encouraged and assisted in their move to the next step in performance testing: within and across-herd EBVs. EBV stands for estimated breeding value and is a measure of genetic merit, The data is far more accurate than the data from buck tests.

A sheep research program will be initiated at the Western Maryland Research & Education next spring (2018). The pastures are being re-established and new infrastructure is being put in, as the hoop house that was installed several years ago was completely destroyed this past winter.

Internal parasites (GI worms) will likely continue to be the focus of the research program, as it is a logical follow-up to the goat test and parasites remain a major obstacle to profitable small ruminant production. We also plan to plant different forages for grazing.

Dr. Dahlia O’Brien at Virginia State University (previously at Delaware State University) was instrumental to the success of the test, as she performed all the fecal egg analyses.

Thanks to the Maryland Grain Producers Utilization Board for providing funding for the pen vs. pasture studies.

Thanks to everyone who supported the goat test over the years, including all the consigners and buyers of bucks.