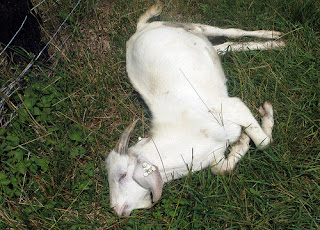 Nonpredator causes accounted for about three-fourths of all adult goat and kid death losses in the United States in 2015. Undetermined causes (found dead or unknown) accounted for the highest number of nonpredator losses in both goats and kids. Of known losses due to nonpredator causes, internal parasites were the primary cause of loss, resulting in almost 87,000 goat and kid deaths in 2015.

Source: Goat and Kid Predator and Nonpredator Death Loss in the United States, 2015
Posted by UME Small Ruminant at 5:13 PM