There is a widely-publicized myth that goat meat (chevon) is the most widely-consumed meat in the world. It is not. In fact, it is mathematically impossible, given the number of goats in the world and the yield of an individual goat. Even if you increased world goat population figures by 10-fold, it is still impossible.

In addition, the consumption of sheep and goat meat is usually lumped together. It is often left out of data sets, because it is so minor compared to the major meats. And it is harder to obtain accurate data pertaining to sheep and goat meat consumption, as the animals are often slaughtered on-farm and consumed locally. 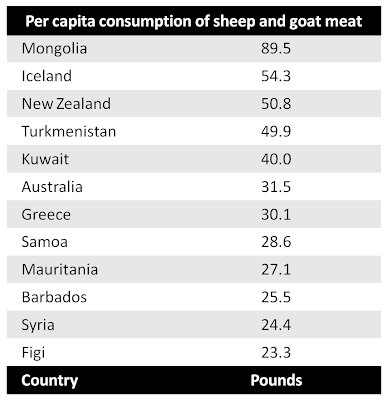 The most widely-consumed meats in the world (in order) are pork, poultry, and beef. While it's possible that more people in the world eat goat meat (and sheep meat) than pork, poultry, or beef, most consumers of goat meat live in the developing world, where the per capita meat consumption is very low. It may be their preferred meat, but they don't eat a lot of it.

The table (above) shows the countries of the world that consume the most sheep and goat meat. Some countries probably eat more lamb, others more goat. The data is from 2007. The source is the Food & Agricultural Organization of the United Nations.

Great article. I have always wondered about that goat meat=most consumed meat idea. It just did not make sense. But you have cleared it up quite nicely. Thanks!

Figi????? Fiji is the correct spelling