We Are Eliminating Scrapie

In its March 2013 report, USDA-APHIS reported that the percent of cull sheep (adjusted for face color) found positive for scrapie (at slaughter) was only 0.006 percent (at the end of FY2012). This is a decrease of 96 percent since slaughter surveillance began in 2003. 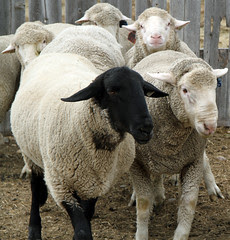 The goal of the National Scrapie Eradication Program is to eliminate scrapie by 2017 and document the absence of scrapie for the following 7 years, thereby giving the United States recognition as a scrapie-free country.

Scrapie has been diagnosed predominately in sheep and predominantly in blackface sheep. While few goats have been diagnosed with scrapie (only 32 since FY2002), a meat-type goat (in Maryland) submitted as a clinical suspect tested positive in FY2013.

Scrapie is a fatal, neurological disease that affects sheep and goats. It is in the same family of diseases (transmissible spongiform encephalopathies or TSE's) as mad cow disease, chronic wasting disease, and Creutzfeldt-Jakob disease. There is no human health risk associated with scrapie.