A Blood Test to Determine Pregnancy

In their recently published 2013 Sheep Research Report, North Dakota State University reported on a study whereby they evaluated the effectiveness of the BioPRYN blood test to detect early pregnancy and pregnancy rates in sheep.

The BioPRYN test can be used to determine pregnancy status in cattle, bison, goats, sheep, deer, elk, and other ruminants. It measures the presence of Pregnancy-Specific Protein B (PSPB), a protein only produced by the placenta of a growing fetus, in the blood circulation of the female. 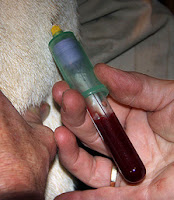 The BioPRYN (PRYN stands for "Pregnant Ruminant Yes No) test is commercially available from BioTracking, LLC. The test costs approximately $6.50, plus the cost of the sample tube and needle

The alternative to blood testing for pregnancy is ultrasound scanning, which requires expensive equipment and a highly trained technician. In some states, only licensed veterinarians may provide the service.