On October 26, 2012, Muslims from all over the world will celebrate Eid al-Adha (in English, "Feast or Festival of the Sacrifice"). 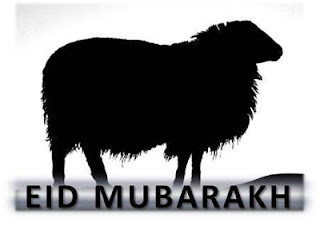 In commemoration of Abraham's willingness to sacrifice his son to God, it is customary for Muslims to sacrifice (slaughter for meat) sheep or goats (or other hoofed livestock). The meat from the sacrificed animal is divided into three parts. The family retains one-third. Another third is given to relatives, friends, and neighbors. The other third is given to the poor and needy.

The animals that are slaughtered must meet certain age and quality standards. Usually, an intact male is preferred. The animal should be unblemished (no docking, castrating, or dehorning). It must be slaughtered according to Halal standards.

Many sheep and goat producers market their animals in advance of Eid al-Adha, as there is usually an increased demand for sheep and goats among the Muslim-American community and the businesses that support it.
Posted by Susan Schoenian at 10:38 AM

Email ThisBlogThis!Share to TwitterShare to FacebookShare to Pinterest
Labels: marketing